Hanukkah (also spelled Chanukah) is a remembrance holiday. It remembers what happened a time long ago, when the Jewish people fought an evil king, even though they were seriously outnumbered. But don't worry. This story has a happy ending!

Here's what happened: A long time ago, in ancient Israel, over 2,000 years ago, the Jewish people who lived at the foot of a mountain were farmers and shepherds. They were a peaceful, hard working, happy people. On holidays, they traveled to the top of the mountain, where they gathered at a special Temple. The Temple gates were covered in gold and silver. The inside was kept clean and welcoming. There were people who tended a special oil lamp. Their job was to make sure the lamp never went out, and that it was filled with pure oil, so it could provide a light that always burned brightly.

One day, a new king came to town. He brought many soldiers with him. Things change for the worse. The king had been traveling from place to place, forcing people to worship the gods in which he believed. Anyone who tried to worship in a different way was killed. Some Jewish people were afraid. They pretended to worship the king's gods. But one man fought back. His son, Judah, became the leader of the Jewish resistance. The Jewish people nicknamed Judah the Maccabee, which means the hammer. The men who fought with him soon became known as the Maccabees.

A Great Animated Cartoon Story of Hanukkah for Kids!

Led by Judah, the Maccabees raced up the hills, and hid in caves. The king's soldiers were sent to kill them. The king's men had bows and arrows and swords and horses and even elephants. But every time the king's men came up the mountain, the Maccabees threw rocks at the soldiers and fought with swords and shields, then fled away to hidden caves where the soldiers could not find them. It took three years, but the Maccabbes finally drove the terrible king and his horrible men away.

The Jewish people were so happy. Their cries of joy changed to gasps of shock when they saw their temple. It was filled with garbage. The alter was in pieces. The people went to work. They cleaned the temple. They built a new alter and new doors. With many hands working, it did not take long before the temple was clean again.

Then came a most important part - the lighting of the lamp. But the only oil they could find was one small jar, with only enough oil for one day's burning. Some of the Jews went running off to get more oil, but it would take time. The people thought about waiting, but decided to light the lamp anyway, even though it would only burn for one day. Much to their surprise, on the second day, the lamp was still burning. Some said perhaps there was a little oil left. On the third day, the lamp was still burning. Again on the fourth day, and the fifth, and the sixth, and the seventh, and the eighth. The people gazed in awe at a lamp that could burn brightly without oil. They knew they were looking at a miracle. By the evening of the eighth day, the men had returned with oil, and the oil had been made pure. That night, the empty oil chamber on the lamp was filled.

Judah declared that every year on that day, an eight-day holiday would begin. The holiday was called Hanukkah, which means "dedication."

Today, Hanukkah is sometimes called the Jewish Festival of Lights.

The first day of Hanukkah changes each year because it is based on an ancient Jewish calendar, but the date always falls somewhere in November or December.

Each part of the Hanukkah celebration is important and must be done in a certain way. Each day, one candle is lit in a ceremony. The center candle is used to light the other eight candles. It's important to know how to light the Menorah - the special candle holder. Special games are played, like Dreidel, and special foods are made, like Latkes (a sort of potato pancake) and jelly donuts. Some families exchange gifts. It's a time for families to be together.

Make a Dreidel - pattern, free download. For directions for how to play Dreidel (scroll down)

All about Hanukkah - What's the story?

For Kids: Cartoon story with more details - the real story of the Chanukah 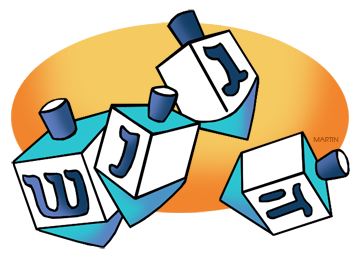 How to Play Dreidel

NOT FOR A CLASSROOM ACTIVITY OR FOR A SCHOOL ASSIGNMENT, but if curious, here's how to play dreidel.

You can use anything, but for kids, a good way to play is to start with $1.00 each in pennies, or 100 pennies. Everyone has the same amount. The object of the game is to win everyone's money, so that you are the only one left with pennies.

The Dreidel: This is a toy, a top you spin, with four Jewish letters, one letter per side.

To Start: Everyone puts one penny in the center of the table (the pot)

Play: Each player in turn spins the Dreidel. Depending upon how the Dreidel falls, the Jewish letter on top is what you have to do.

Whenever the pot is empty, everybody has to put in one penny to make a new pot.

The game is over when one player has won everything, and is the only player left with pennies.

It's a very simple game, and lots of fun.