Passover, called Pesach in the Hebrew language, is an important Jewish festival. It is celebrated by Jewish people around the world each spring. This is a time when Jewish people remember how the Israelites were freed from slavery with the help of God over 3000 years ago, when Moses led his people out of Egypt, with Pharaoh's army on their heels. Passover is often called the Holiday of Freedom. The story of Passover is an ancient story. You can find it in the Bible

Here's how the story goes:

Once upon a time, in ancient Egypt, the Jews were respected members of society. They were not slaves. But when a new Pharaoh came to power, things changed. The freedom of the Jews was revoked and the Jewish people were forced into slavery.

Moses, the leader of the Jews, went to see Pharaoh many times. Each time he asked Pharaoh to allow his people to leave Egypt. But Pharaoh refused. He wanted the Jewish people to remain slaves. Pharaoh believed this was the best thing for the Egyptian people. But it was not the best thing for the Jewish people. Moses warned Pharaoh that God would send terrible plagues to descend on Egypt if Pharaoh did not let his people go. Pharaoh only laughed.  Pharaoh believed in many Egyptian gods, but he did not believe in the god of the Jews.

To Pharaoh's surprise, just as Moses had warned, each time Moses came before Pharaoh and Pharaoh refused to let the Jewish people go, a plague descended upon Egypt. The first affected the Nile River, a river critical to the Egyptian way of life. The waters of the Nile turned to blood. People could not use the waters for washing, irrigation or cooking. Pharaoh was very angry. He did not know how anyone could accomplish such a trick, but the culprits who did this would be severely punished when caught. In the meantime, once again, he refused Moses' request, and not very politely either. Once again, God sent a plague, this time a plague of frogs. Frogs were everywhere!

Each time Pharaoh said no, a new plague descended upon Egypt. All together, there were 10 plagues:  blood, frogs, gnats, flies, diseased livestock, boils, hail, locusts, darkness and finally - one more. The 10th plague was the worse plague of all. Moses warned that God would cause the death of the first born child in every Egyptian home if Pharaoh did not let his people go. By now, Pharaoh was absolutely furious. He said no quite loudly. God had told Moses if Pharaoh refused again to tell the Jews to mark their doors with lamb's blood so that God could "pass over" their homes and spare their first born child. And so they did.

The morning after this terrible deed, there was an outcry and a wailing in Egypt. Pharaoh too had lost his first born, his son. He told the Jews to go, to leave Egypt, and to never return. Quickly, before Pharaoh could change his mind, the Jews left their homes in such a hurry that they did not even wait until the early morning bread dough they had made had time to rise. They cooked it the way it was. It came out flat, but that was fine. It was still food they could eat as they traveled. They grabbed a few other things and followed Moses as he led them out of Egypt. 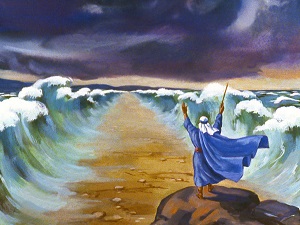 But it was a trick. Pharaoh had no intention of letting them go. He sent his army to bring them back to remain as slaves. When the Jews reached the Red Sea, Pharaoh's army appeared behind them, coming rapidly closer. The sea was at their back. They had no boats. They had no weapons other than wooden staffs. According to the Exodus story in the Bible, Moses held out his staff and the Red Sea parted, creating a path of dry earth, with huge walls of sea water held back on either side.

The people were afraid to follow the path into the sea, but Moses reassured them that God had created this path to help them escape their lives of slavery. Have faith, he told them. The people hurried down the path as fast as they could. They could hear the sound of the marching army behind them entering the path. It was a terrifying sound. With the Egyptian army on their heels, they reached the other side of the path. They had arrived in the land of Canaan (Israel.)  But the Egyptian army was close behind them. Moses lifted his staff, and the sea walls closed over the path, drowning the entire Egyptian army.

That's how the Jewish people escaped Egypt and slavery.

How Pesach is celebrated today around the world

Pesach (Passover) is celebrated for 7 days in Israel and 8 days in Diaspora (anywhere Jews live that is not inside the borders of Israel) and is the holiday that requires the most exacting preparation. The house is cleaned thoroughly, and every trace of Chometz is removed. Chometz is any food product made from wheat, barley, rye, or oats that has come into contact with water and allowed to ferment and "rise". That includes breads, pasta, cake cookies, some wines - it's a big list. Some families offer prizes to their kids if they can find any crumbs overlooked in pockets or in the car or anywhere at all that belongs to the family because all Chometz has to go. Every bit of Chometz they find goes into a box. The box is delivered to a rabbi and sold. Only specially prepared products are eaten during Passover. Separate dishes, silverware and cooking utensils are used throughout this festival.

The Seder is conducted on both the first and second nights. The Seder is a tradition, a service, and a dinner feast. You can invite family and friends to this special evening. During the Seder, the Haggadah is read and the story of the exodus from Egypt is recounted with poetry and song and story. Everyone takes part in the reading and telling of this story. Everyone has a cushion to lean on to symbolize they are not slaves but free people. At the end of the story, four questions are asked by the youngest child, and the father or head of household answers them.

The Seder plate is placed in the center of the dining table to symbolize certain things. The Seder plate has six thing on it: Charoseth, which is a mixture of apples, nuts, cinnamon, and wine, is used to symbolize the mortar which the Israelites used to join the bricks while building in Egypt.  Parsley is placed on the plate to symbolize spring as Pesach is a spring holiday. The parsley is dipped in salt water (tears) during the service. Bitter herbs are added to symbolize the bitterness of the Israelites' lives in Egypt. The bitter herbs and pieces of lettuce are dipped in the Charoseth during the service. The lamb shank bone symbolizes the paschal lamb sacrifice. The boiled or roasted egg symbolizes perpetuation of the Jewish faith or the eternal life. Do not eat fro the Seder plate.

For dinner during Seder, you can eat several things including Gefilte Fish with Horseradish, Chopped Liver, Stuffed Veal Breast and Stuffed Roast Turkey (be careful with stuffing), Carrots glazed with honey, Green Salad, Sponge Cake with Strawberries, Passover Nutcake, Coffee, and Tea to name a few. It's a feast.

Passover for Kids - animated, What if we never left Egypt?