For Kids: PURIM is the ancient story of Esther and a Babylonian (Persian) king.

The Bible tells the story of Esther, a Jewish girl in ancient Persia. Esther loved her uncle, the gentle Mordecai. Because of his care and guidance, Esther grew up to be loving and kind. Many men wanted to marry her, but Esther was not in a hurry to find a husband. She knew in her heart that life held something special for her. And so it did.

The king of Babylon had banished his wife because she had not obeyed him, and was now looking for a new bride. From all the ladies in the land, Esther was chosen to be his new queen. Esther was very happy. She grew to love the king, and he grew to love her. But, she did not tell the king that she was a Jewess. Some people did not care if you were a Jew or not, but some hated Jews. One such hater was the advisor to the king, an evil and cruel man named Haman.

Because Haman was a high official, he expected everyone to bow to him. Esther's uncle, Mordecai, refused to bow before a man such as he. That made Haman furious. Haman learned that Mordecai was a Jew. That meant Esther was a Jewess. What a great opportunity, Haman thought to himself. I can use this to rid the land of Jews forever!

Haman rushed back to the castle, eager to report to the king. "Once again, the Jews refused to obey the orders of the representative of the king!" Haman told the king angrily. Haman recommended that all Jews be wiped out of the Empire. The king agreed. The day was chosen by casting lots (Purim) and the 13th day of Adar was chosen. (On a modern calendar, a day in February.)

The castle was alive with rumors. When Esther heard about Haman's plan, she knew she had to do something. Courageously, she went before the king although he had not summoned her. She invited the king to a special banquet she was preparing. The king was delighted and did not punish Esther for coming before him without an invitation. After an excellent dinner, Esther told the king that Haman's plans would include her as well, because, as the king's advisor knew, she was a Jewess. And she told the king that her uncle Mordecai, a Jew, had reported a plot to kill the king, thus saving his life. She asked that her people be spared.

Finding these things out, the king immediately ordered the Jews saved and Haman hung. 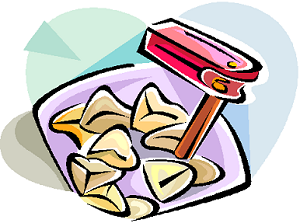 Today, on Purim, the Megillah (Story of Esther) is read and when the name Haman is said, the roar of the noisemakers and stamping of feet drowns out the reader.

As part of the Purim celebration, shalachanot are exchanged (gifts of food). The Purim Seudah is usually composed of dishes that are not of the everyday variety. Hamantaschen (3-cornered cakes) are eaten to symbolize Haman's hat. There is usually a Purim carnival (Adloyodah) or masquerade. Purim is sometimes called the Jewish Halloween.

The Princess of Persia, the story of Esther in 4 minutes (animated cartoon)

Purim free use clipart from the clipart library